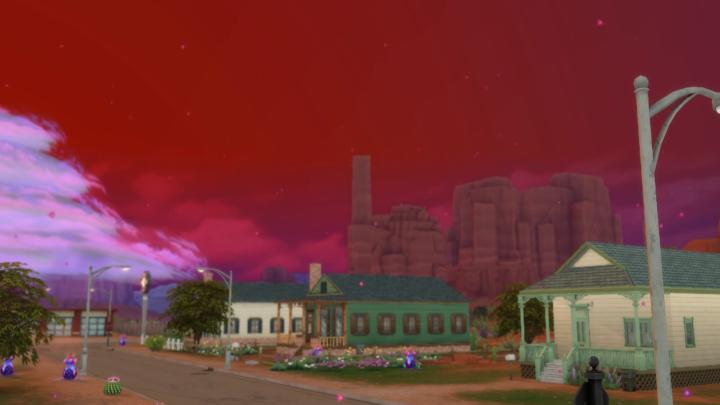 Things get increasingly worse in StrangerVille. What's going on in this town? This story summary should help explain a great deal of the plot.

StrangerVille's story is told in bits and pieces while you investigate, so some players will completely miss elements that contain information that may be vital to understanding the narrative. For this reason, I've decided to take all the information and try to put it in chronological order. All info here is taken from the game files - a lot of the more interesting plot backstory comes from the archives, which can be found on the bookshelves in the town library. This is entirely miss-able as you're never forced to read at the library.

How The Crater Formed

There's a Secret Lab in the crater, but how did the crater form?

A History of StrangerVille
"Stories passed down by the indigenous people who lived in the region long ago speak of a blinding purple light in the sky, followed by a massive explosion. It is believed that this is the source of the StrangerVille Crater."

Military Base and Secret Lab Founded 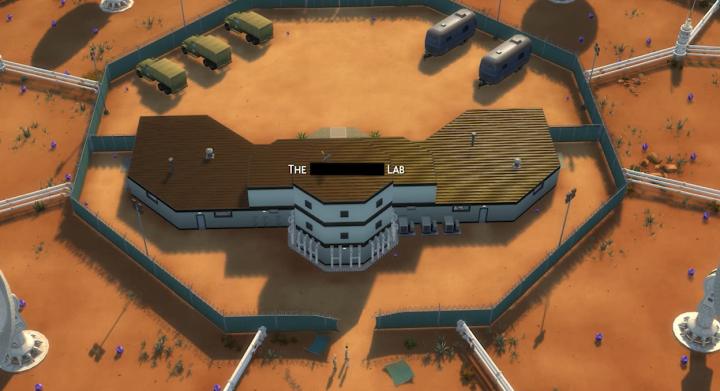 Why would the military and a high-tech lab want to move into a dusty little town like this?

Old Newspaper Clipping
"The Military arrives in StrangerVille! Residents rejoice as a new base opens near the crater. The City Council welcomes the opportunity of new jobs for the struggling town."

Recent Newspaper Clipping
"New Era for StrangerVille! A high-tech super-science facility is being constructed in the crater. While residents are eager to modernize the town, the amount of secrecy surrounding the project has some people on edge."

Letter to the Editor
"They say they're here to help us, but there's barbed-wire around the crater now! What are they trying to hide??? Doesn't anyone see what's going on here?!? Wake up, sheeple! Also, a quick shout out to the Curio Shop near the old mobile home park. They have some great shirts and posters for those of us in-the-know"

Unsolved Mysteries of StrangerVille
"A local resident claims that after he found his lost cat outside the crater, it became unreasonably afraid of his houseplants and wouldn't stop hissing until they were all removed from his property."

Newspaper Clipping
"After the incident, there have been reports of Bizarre Plants growing around town. No one has been able to figure out why they are spreading so quickly. Efforts to eradicate them have been fruitless; for each sprout removed, three grow back in its place."

Promotional Flyer
"Clogged drains? Call Undercover Plumbers for a free inspection. We're available for all hours, even when you're not at home! Our state-of-the-art vans are equipped with the latest in satellite-uplink plumbing technology."

The Player Sim Moves In

The lovely little town of StrangerVille.

Welcome to StrangerVille
"The only thing stranger than the people is the flora!"
Soon after moving in, the town's slogan is starting to make sense to you. Some of the locals are acting a bit suspicious and there's a large number of Military and Scientists in town. Try asking people about StrangerVille. They might be able to shed some light on this strange situation.

The player arrives a few weeks after an explosion at the Secret Lab nicknamed, "The Incident", has caused the facility to be abandoned. Military are still seen regularly at the town bar drinking after a hard day's work guarding a base in the middle of nowhere, while scientists are continuing their research at the local library. Bizarre plants have begun to pop up all over town and Sims are behaving strangely, as though possessed. Sims who live here are at times under some form of mind control and unresponsive to normal stimuli, though sometimes a slap to the face will get them back to reality. 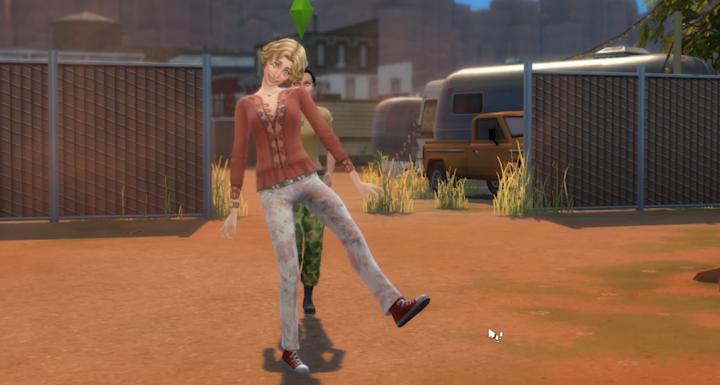 A Sim under mind control. The StrangerVille infection can affect anyone.

Scientists are rumored to be working on a cure for this StrangerVille virus, though the military's involvement is suspicious. The military randomly inspect homes for signs of infection and may confiscate home appliances where it is detected. They have increased their presence in the town. Vans scanning for infection are seen routinely on the small town's roads, looking for homes to raid. Due to all this odd activity, conspiracy theorists in town believe the military is covering up something that happened at the lab. After all, no one was behaving this way until the incident.

Although the secret lab is surrounded by barbed wire, Sims are able to sneak in thanks to a breach in the fence. Security at the base is still somewhat functional, as there's a sealed door that requires a Key Card. At this juncture basically everyone is suspicious of the lab and it is believed something is inside as it's been sealed shut. 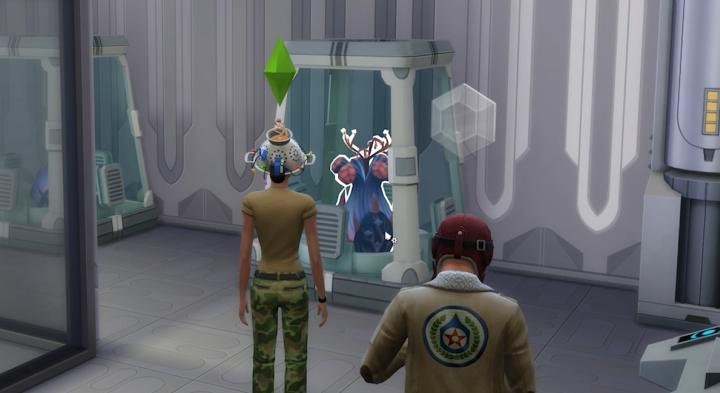 When the player Sim investigates and compile a dossier on the mystery, they acquire a key card from the Curio Shop owner or former personnel and unseal the lab, releasing something upon the town.

The player Sim investigates for spore clusters, hoping to determine their nature.

The Bloom Begins
Leaving the Secret Lab you can't help but notice the sky has shifted to an eerie color. Something has changed in StrangerVille, and not for the better. Opening that lab door must have released some kind of toxin into the air. You will need to find a way to protect yourself from the toxic spores in the Secret Lab. Try talking to people around town to see if they know of anything that might help.

Townsfolk notice extreme changes in the area, with one saying "That strange cloud that is building over the crater does not look normal. I bet something is trying to get out...". The Bizarre Plants have all doubled in size, as thought something were growing inside them. Military are now talking more about scanning for infection and spores that have spread over the community. 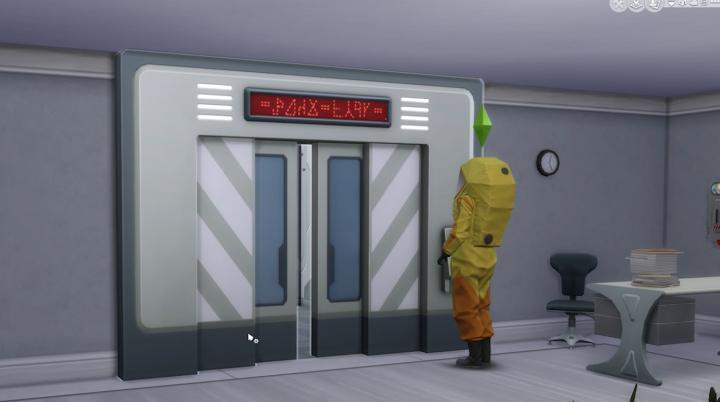 Exploring deep in the lab to find out what the Military is hiding.

The player needs infection profile data, and acquires it with the infection scanner and a little science back at the lab. They fashion a hazmat suit with a spore filter with a Scientist's help. Upon inspection of the lower levels, a massive Mother Plant is discovered. It becomes clear Mother is spreading and is responsible for the mind control, though some citizens believe the Military has been spreading the spores on purpose as though constructing a biological weapon that is already out of their control. 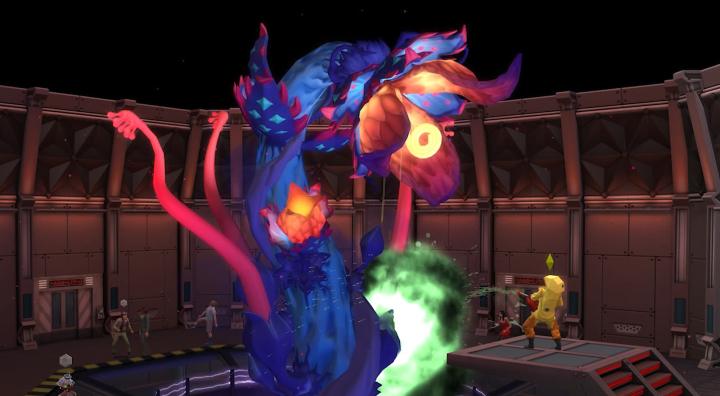 It would seem the Military are not only trying to keep Sims out, but also keep Mother locked in. On defeating her, the infection can be cured and the town returns to normal.

Stop The Infection
You've discovered the source of the infection plaguing StrangerVille: an enormous "Mother" plant buried in the base of the lab. The only way to get the town back to normal is to defeat the vile creature! Find a cure for the infection and assemble a team to destroy the Mother Plant.

The air in the town grows worse by the hour, and a massive storm rages over the crater. Nerves are frayed and the town is on high alert, fearing when it's their turn to become a mindless zombie with really poor posture.

Using the spores and the fruit nurtured lovingly from the bizarre plants, the player is able to formulate a vaccine after several tests on the townsfolk. With vaccine in hand, it's possible to confront the Mother without becoming mind-controlled. The player assembles a small team of vaccinated Sims and delves deep into the lab to confront the mother. They throw the vaccine in an explosive container and it's merciless at breaking her will to fight. She lashes out one last time but falls, defeated but not dead.

With the town returned to normalcy, what made StrangerVille unique is mostly gone. The hero decides to keep the Mother around as a cutesy pet that can do their bidding, creating strangeness at will and taking long-lasting cosmic magic boosts for their own gain. The Hero of Strangerville manifests itself as an entirely new problem the town should fear. That's how I look at it, anyway.

Thousands of years ago, something crashed here and formed the crater in a massive explosion. It probably lay dormant for some time, until discovered by modern technology. The military attempts to harness its power - perhaps to create a new weapon technology - but things go very wrong and an explosion causes the base's containment to fail. This leads to the infection of residents, with Mother attempting to spread out from her prison. She is trapped but her influence can spread via the Bizarre plants that pop up everywhere. The plants try to lure you with a nice-looking fruit, but this only allows Mother to infect you.

When the player defeats mother, they get a wish-dispenser.

We now have a page on The Sims 4 Journey to Batuu.

It's not what I would have hoped for in a Star Wars Game Pack so far.